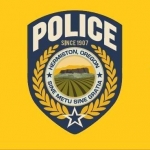 HERMISTON, Oregon – Hermiston Police Chief Jason Edmiston has issued his annual report, and said 2019 was much better than the year before when the department was critically short staffed.

That drop in crime came during the period that saw the city’s population rise dramatically.

One of Edmiston’s goals for 2020 is to beef up police activity in the schools by adding a third school resource officer.

“That’s a huge partnership that we have with the school district: to be able to have an officer assigned to the five elementary schools, which will become six once they build the new one,” he said.

That would put officers at all levels of K-12 education in Hermiston.

Another area the chief wants to improve is officer wellness. He said programs dedicated to the health of his staff will be included in the budget request to the Hermiston City Council.