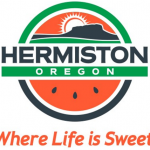 HERMISTON, Oregon – The Hermiston City Council will consider purchasing two pieces of property at its meeting Monday at 7 p.m. The property is considered essential to realigning the intersection at Northwest Geer Road, West Harper Road, and North First Place.

The land is valued at $65,000. The entire realignment project is an estimated $1.5 million. The intersection has been on the city’s radar since 2017, when it appeared in the five-year capital improvement plan.

“Because of the intersection’s geometry, which dictates placement location of stop signs, there are several locations where a driver has three stop signs in their direct line of sight,” a staff report states. “This can create a hazardous situation.”

Also on the agenda, the council will consider recommended housekeeping changes to its garbage and public contracts ordinances.