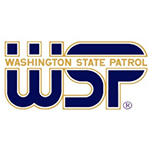 “In February 2019, we had a month-long snow storm that caused an increase in crash numbers,” Trooper Chris Thorson said.

“Snow on the ground is not good for stopping cars, (it’s) too dangerous,” Thorson said.