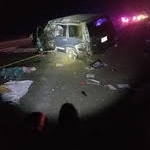 The following is a news release from the Oregon State Police:

On Thursday, November 7, 2019, at approximately 2:00 A.M. Oregon State Police Troopers and emergency personnel responded to the report of single vehicle rollover crash on I-84 near milepost 151.

Preliminary investigation revealed that a light blue 1999 Jeep Grand Cherokee, occupied by Jason Michael Gentilini (29) of Beaverton and Ariel Leigh Holien (28) of Hillsboro, was traveling eastbound on Interstate 84 when for unknown reasons the Jeep drifted off the interstate causing the vehicle to roll. OSP is still investigating which person was driving.

OSP is requesting anyone who witnessed the crash or the vehicle before the crash to contact the Oregon State Police at *OSP and refer to Sergeant Placido Lopez.