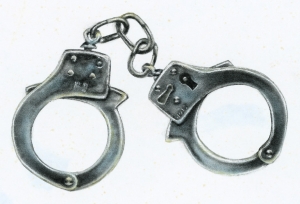 WAITSBURG, Washington – The Walla Walla County Sheriff’s Office arrested a man Thursday afternoon on multiple charges after it was reported he was using a baseball bat to smash things inside a home.

According to WWCSO Chief Deputy Richard Schram, the mother of Markes A. Cantrell called dispatch to report she had fled from her home in fear for her life.  Schram said she claimed her son was inside with a bat smashing the kitchen and that she feared he would beat her to death.

Cantrell’s mother, according to Schram, added that her son had been high on methamphetamine all night.

Two other females were inside the home.  One was able to escape and the other was forced to climb out a window and hide on the roof.

Law enforcement from the Columbia County Sheriff’s Office, Walla Walla Police Department and the Crisis Response Team responded to the scene to assist.  Waitsburg Fire Department brought a ladder to rescue the second female from the roof.  Schram said she provided information that the suspect was still in the house as she could still hear him inside.

After hours of calling into the house, obtaining the use of a search warrant and using a WWPD K9, Cantrell was located hiding in the attic with a metal bat.  He was taken into custody without incident and transported to the Walla Walla County Jail, where he’s being held on a $10,600 bond.