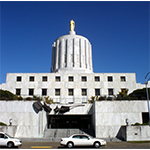 SALEM, Oregon – Oregon’s public transit is getting a $62 million investment from the state payroll tax.

When the legislature passed a huge transportation bill in 2017, part of that bill was a one tenth of a percent payroll tax to pay for public transit projects.

“Oregonians should be able to travel from across the state using public transportation – to have those options,” said Karyn Criswell, ODOT transportation improvement fund project manager.

“Salem area mass transit is able to provide Saturday service for the first time in I’m not sure how many years,” she added.

Projects are planned for Klamath Falls, Astoria, Columbia, Douglas, Deschutes and Crook Counties, as well as Rogue Valley and the Lane Transit District.