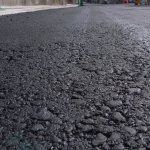 PENDLETON, Oregon – Every year after the Round-Up, Pendleton Public Works Department staff gets busy on a list of street repair projects for the next year. Director Bob Patterson says the list should be done by the end of this month.

“2020 is right around the corner and the city council has established a budget of $1.2 million for basically preservation work to the streets,” Patterson said.

That total is reached from a number of ways. First, there are state and federal gas taxes as well as two local sources.

The street utility fee money is earmarked by the city council with 70 percent of it going towards projects that keep streets in good repair, and 30 percent going to roads that need serious work.