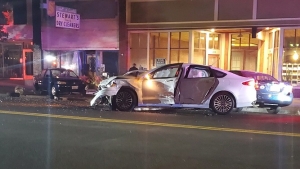 WWPD Sgt. Jeremy Maiuri told KTEL News that officers responded to the 200 block of E. Alder Street at about 1:46 a.m.

Multiple passengers were inside the vehicle and Maiuri said two people were transported to the hospital.  None of their injuries were considered to be life-threatening.

Tyler Lee Martin was booked into the Walla Walla County Jail suspected of DUI.  His bail is set at $1,000.