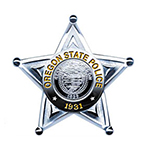 On Wednesday, September 11, 2019, at about   10:30 a.m., Oregon State Police and emergency personnel responded to a three-vehicle crash on State Route 82 near milepost 38.

Preliminary investigation revealed that a Ford F150 pickup, operated by Christy ERICKSON (31)(F) of La Grande, with two child passengers, was eastbound negotiating a curve when her vehicle left her lane of travel and sideswiped an on-coming Subaru Outback, operated by Mary IMPORTICO (31)(F), and passenger Ryan IMPORTICO (32)(M) both from Portland. The collision caused the Ford to continue to the left into the oncoming lane and struck a Dodge Ram pickup pulling a trailer nearly head-on, operated by Colby RIMMER (25) (M) and passengers Daniel RIMMER (53) (M), Michael CRAMER (41) (M) and John KRAUS (38 ) (M), all from California.

State Route 82 was closed for approximately five hours and one lane opened up for three hours while the on-scene investigation was conducted. 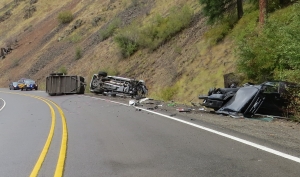