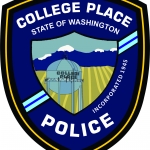 COLLEGE PLACE, Washington – College Place police officers stopped Richard T. Perez at Southeast Larch Avenue and Southeast Fourth Street because he was riding his bicycle on the roadway without proper lighting or reflectors. Because Perez had an outstanding misdemeanor warrant from Walla Walla, officers took him into custody.

Initially, the suspect told police the bike belonged to a friend. However, it was checked and turned out to be owned by Perez.

He then told officers there was a fanny pack on the bike that he wished to take with him to jail. All items going into the jail must be inventoried and officers located what appeared to be methamphetamine in the fanny pack, which they immediately seized as evidence. At that point, Perez reportedly attempted to deny ownership of the fanny pack.

He was lodged in the Walla Walla County Jail on the outstanding warrant. Officers then applied for a search warrant and tested the substance, which CPPD reports was 2.6 grams of methamphetamine.

Charges against Perez for possession of a controlled substance are pending.