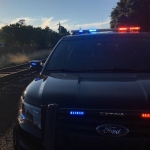 WALLA WALLA, Washington — A Walla Walla man was arrested after allegedly firing a gun near the head of another man for unknown reasons.

According to a news release from the Walla Walla Police Department, the report of a gun being fired came to police around 7 p.m. WWPD then responded to the 1100 block of West Chestnut Street. Police found Perdoma and also found that he had a stolen gun in his possession.

According to WWPD, Perdoma fired the handgun near the face of another man, whom he was apparently acquainted with, but didn’t strike him. The bullet did hit a house in the area.