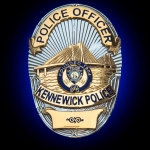 KENNEWICK, Washington – A Burbank man has been arrested for allegedly trying to kidnap a Kennewick man Tuesday afternoon and then assaulting the victim over a property dispute. Marc White, 39, of Burbank and Alecia Henning, 34, of Kennewick, were arrested Wednesday morning.

According to the Kennewick Police Department, detectives responded at about 1:50 p.m. Tuesday to a possible disturbance in the area of West Fourth Avenue and South Conway Place. The victim, a 41-year-old man, indicated at that time that White and Henning were looking for him and he was concerned for his safety. The man provided a description of a white GMC Denali as a possible suspect vehicle.

Sgt. Aaron Clem, KPD public information officer, wrote in a news release that White was known to have an outstanding felony arrest warrant. Detectives found a vehicle matching that description and attempted to stop it.

The rear passenger door opened, and the victim jumped from the moving vehicle sustaining several injuries. The vehicle fled the scene and the detectives remained with the victim who was later transported to a Tri-Cities area hospital for treatment of his injuries. He has since been released.

KPD investigators believe the victim was forced into the vehicle by White. Once in the vehicle White allegedly assaulted the victim over a property dispute.

At about 10:15 a.m. Wednesday, KPD detectives, with the help of the U.S. Marshals Service and the Pasco Police Department, located White in a vehicle. The vehicle was stopped on Washington Highway 395 at the base of the Blue Bridge. White was taken into custody without incident. Detectives located Henning at her workplace and arrested her, also without incident.

White and Henning were booked into the Benton County Jail. He faces possible charges of kidnapping, second-degree assault and felony harassment, as well as the outstanding felony warrant. Henning also faces a charge of first-degree kidnapping.