WALLA WALLA, Washington — Walking down Main Street on today will be a different experience for residents and tourists, as of last year. Batman logo stickers can be seen on the front of businesses around town; anyone from bankers, baristas to shop owners can be seen in their favorite Batman gear, and it’s all to celebrate Walla Walla’s very own Adam West, the iconic 1960’s TV star of the original “Batman” series who passed away last year. Even the Marcus-Whitman Hotel dons the black and yellow, and it can be seen from afar as you drive into town. 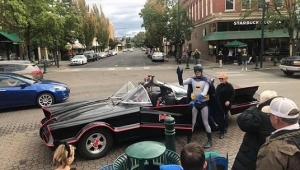 West, who was born Sept. 19 in Walla Walla, attended Walla Walla High School and Whitman College, before being drafted into the U.S. Army, where he served as an announcer on American Forces Network television. Later, he made a move to Hawaii to pursue a career in acting, where it all began.

Today in Walla Walla, there are a variety of celebratory events going on, says organizer Jonathan Grant. The Adam West Experience, which happens all day, is comprised of any business in Walla Walla that either has an Adam West Day poster or their windows decorated will be offering a special promotion in West’s honor. You can also stop by the Marcus-Whitman’s parking lot for a free photo with the Bat-Copter.

The Adam West Exhibit at the Kirkman House Museum opens today, and admission is free. There will be rare photos and memorabilia of Adam West! The library has been transformed into Wayne Manor with a secret room that will unveil the bat cave.

Meet Batman at Land Title Plaza in downtown at 11 a.m. and take free photos with the Batmobile. There will be a conversation with Johnny Greene and the unveiling the final Adam West Statue Design at the Marcus Whitman Hotel at 1 p.m. Johnny Green played one of the Joker’s henchmen during the famous, “Surf’s Up” episode where Batman and Joker hit the waves. Locals can hear behind the scenes stories on what it was actually like to be on the set of Batman and to be working along side West. The final Adam West statue design will be introduced in its first 3-D format before they submit the plans to the city and art commission for the next step in the process.

At 3 p.m. at the Marcus-Whitman, there will be a screening of the 1966 “Batman” movie in the Grand Ballroom.

At 4 p.m. there will be live music and kids activities, and Daniel Minteer will be performing, for the very first time, the official song of Adam West Day entitled, “Adam West Blues.” Also there will be numerous super hero appearances, Batman mask giveaways and free photos with Batman and the Batmobile.

Last but certainly not least, the bat signal will light up in the parking lot directly across from the Marcus Whitman hotel at 9:00 p.m.