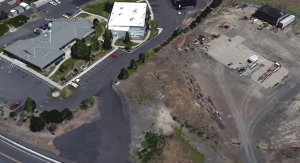 PENDLETON, Oregon – For the first time in years, area legislators and law enforcement officials won’t have to battle and beg to keep the state from closing the Oregon State Police Crime Lab in Pendleton. Not only will the facility remain open, it’s getting a new home.

Construction has just begun on the facility at the intersection of Westgate and Airport Avenue. Forensic Scientist Calvin Davis is relieved that the fight for survival is over.

“It’s a great feeling to know that we’ll have a permanent home from here on out,” he said. “I think it will be a great service to the citizens of Eastern Oregon to continue to have a forensic lab in the region.”

Davis says the staff has been involved in the design of the building from the very beginning.

“It will be a one-story building – nothing flashy about it – but it will be larger than our current facility and will offer some updated laboratory space,” he said.

Davis says the new building will be secure and will be free of the problems, like gnats contaminating evidence, that the current lab has. Because of those problems, some evidence has to be sent to other labs for processing. The new building will not only be clean. It will also offer room to expand if needed in the future.

The crime lab is due south of the Oregon State Police headquarters in Pendleton, and offers easy access to Interstate 84. That’s important because the lab is tasked with investigating crimes in all seven counties of Eastern Oregon. Davis says construction is running on schedule and should be finished in late spring of 2019. Employees will move in at the end of May or early June.