MILTON-FREEWATER, Oregon — More information has been released regarding that shots fired incident over the weekend, which police are now saying may have been gang motivated. 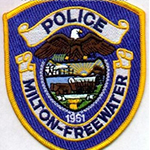 Milton-Freewater Police Chief Doug Boedigheimer confirms the incident occured in the 100 block of SE 5th Street and the surrounding area at 10:48 p.m. on Friday night.

Officers discovered that a drive by shooting had occurred, and a suspect vehicle was described. No persons were struck by rounds fired.

Walla Walla police and county deputies had monitored police frequency, and ultimately saw and pursued the suspect vehicle, which crashed in Washington. Two occupant/suspects were taken into custody almost immediately. A third suspect was arrested by Washington authorities later in the investigation of this event.

The investigation is ongoing, and Chief Boedigheimer says more charges could be pending.